Last night we camped in the bush.

More realistically, we camped in part of the bush that up until yesterday was a buffalo’s home

Buffalo are the meanest of the mean, we will name this one, “Bad, Bad Leroy Brown, the meanest buffalo in the whole damn town”.

The day before three volunteers had been cleaning the camp and ended up within “feel the steam of his breath” distance from Leroy. He, luckily didn’t attack, but they did have to heave themselves onto the Land Driver in a manner similar to Orlando Bloom jumping onto a horse in LOTR: The Two Towers

Shaken up, we all debated not camping – what if that were still his home? Buffalos are the colour of night, we wouldnt even see him coming…

However, the rest of us volunteers had spent hours chopping enough wood for a 12hr fire and our pride would have been very wounded if it had gone to waste.

So, we camped. We braaied (meats consumed: spare ribs, chicken, chicken kebabs and sausage). We drank warm beer, the bottles of which had been marinating in raw meat juice. We tried to take pictures of stars but only half knew how to adjust shutter speeds. We attempted to sing “In the jungle, the mighty jungle,” but realized that it was probably best left up to people who could sing. We slept by the fire (well not all of us slept, one new volunteer was terrified of the bugs and stayed up all night), we took shifts adding more logs. We said “what’s that?” Everytime we heard something and if it wasnt a jackal, our ranger Ebin would always say “Ford” or “Isuzu”, and deadpan remind us that we were only a couple of kilometers from a highway. 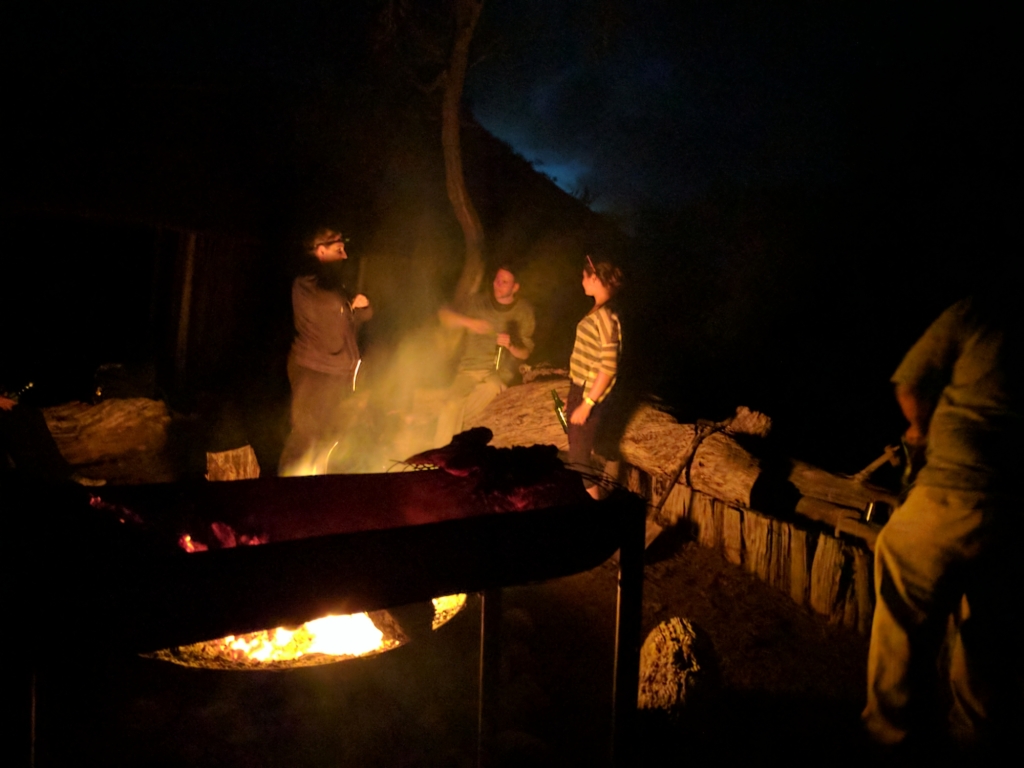 We made it through the night, had tea and peanut butter toast for breakfast and then went on an early game drive.

Everytime we can across another ranger with a car full of guests from the lodge, they would ask “did you all make it through?”

To which I really wanted to say, “if we didn’t do you think we would admit it?”