Most hair salons in Malaysia are conveniently located in the air conditioned malls. Most of them are not busy, you just walk in.

For what is about to happen, not only would you pay through the nose in the US, but the line would also be a week long.

First, for about thirty minutes your hair gets a bubble bath where the bubbles get whipped into meringues, your head gets kneaded like it was the winning dough in The Great British Bake Off, and your scalp gets scratched as though you were a cat’s favorite post.

Then, your shoulders get a little massage.

And then, after you’ve been lulled into a state of relaxation where you couldn’t care if you were there for a haircut or a lobotomy – the procedure begins.

Hello from the Cameron Highlands in Malaysia: a magical place where tea gets made. 85% of the tea grown here stays in Malaysia, but I did learn about tea-making in … END_OF_DOCUMENT_TOKEN_TO_BE_REPLACED

In Malaysia you always need to remember to carry two things:

2. Toilet paper: for use when the water runs out

Much debate has ensued over why exactly there is a giant roll of toilet paper by the sinks: does it save trees, did they just not feel like installing dispensers in the stalls, are we all being filmed for an episode of Candid Camera? To our “Western” brains with “Western stomachs” this design presents two big flaws: what if you forgot to grab some paper, and if you did remember, what if you didn’t take enough.

I think we can all agree that not having enough toilet paper while in a public bathroom is a scenario best left to a movie whose main component is a slapstick sound effects budget and stars anyone from American Pie.

In the end, the answer was infront of our faces (especially went squatting). Malaysia has “wet” toilets. Each stall consists of a couple of hoses (besides.knowing they are for cleaning, I’m not entirely sure how they work) but the end result is that each stall gets hosed down after every use – which makes going to the toilet feel like you’re constantly at the public pool in the summer, and would make it impossible to keep the toilet paper dry.

So, my solution is to constantly carry paper, mainly because I cannot remember to tear some off before I go in, but I can remember to replace the wad in my pockets on the way out.

Last night played out exactly like a scene in a TV show. Titled Turtle Island, the series would be about the sexy rangers and dedicated conservationists that live on a … END_OF_DOCUMENT_TOKEN_TO_BE_REPLACED

Feel like spending a wild Friday night in the rainforest?  Is it the end of Ramadan and you feel like getting down in the jungle to the beat of Malaysian … END_OF_DOCUMENT_TOKEN_TO_BE_REPLACED

At 2am this morning the sky was clear, the stars were out and it seemed almost ashame to let a mountain with a crying problem defeat me.  So, with the … END_OF_DOCUMENT_TOKEN_TO_BE_REPLACED

You may be the highest peak in South East Asia and maybe you’re used to hearing people say how beautiful you are, and how your views are stunning – but sometimes you need to hear from the people who you beat down, whose will power you took so easily, as though it were a muffin from a buffet table.

I’m sure on a normal day, hiking the 6km (as the crow flies) up to the lodge would be doable, and beautiful. It would be a day filled with clouds, giant trees, sunshine and sweaty people.

But, this was not a normal day – today you decided to pour out rain as though this were a rainforest plagued with a drought and you had one day to fix the problem.

Today was the day you made me question my faith in dry bags and anything sold as “water proof”. Today was a day that would have had weathermen named “Storm” out in giant yellow ponchos to report on the extraordinary amount of rain and interview the 105 climbers on whether (ha) the rain was a factor in them being cold: “do you think you would be this cold if it werent raining nonstop for five hours?” And then say, “now, back to the studio, where it’s dry as a hay stack in summer.”

Today was a day when it became obvious that cotton dries slower than synthetic material, and that all the cotton I had brought, that is now slowly dripping down the bannister in the rest house will not dry in time for the 2:30am climb to the summit – estimated temperature at 1am is -1C.

And so, based on the fact that my shoes and my clothes are not going to dry, and I don’t want to pull myself up (by rope) to an icy peak while infact, turning to ice – I have decided (and I’m sure my parents would approve) not to summit

Instead, I’m going to sleep in and retreat the 6km (more like 16km walking) down to the bottom after breakfast.

Kinabalu, I hate you, you defeated me. My feet are still cold. 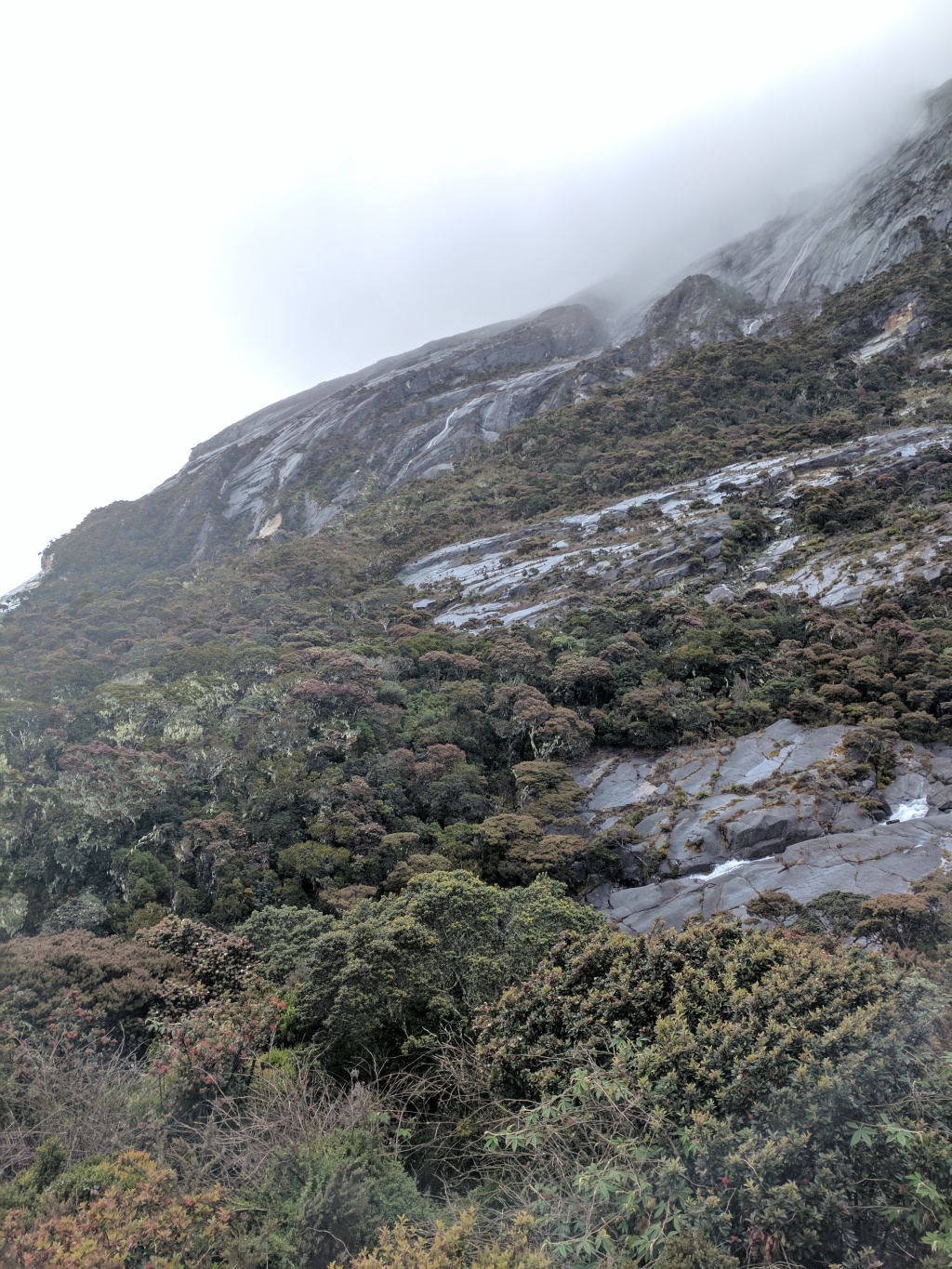 When it’s pouring outside, so you go to the restaurant near your hotel, only there is no English menu, no one speaks English and as a “table for one” they … END_OF_DOCUMENT_TOKEN_TO_BE_REPLACED

Amazon and Alibaba may be taking over the world, eradicating Malls and enabling us never leave home again, but Malls in Asia will never truly die. Why? Because, Air Conditioning … END_OF_DOCUMENT_TOKEN_TO_BE_REPLACED