Where do Russians go when they don’t want to escape Russians, but they need a break from Russia? The beachfront town of Nha Trang, Vietnam.  Transported by over six hundred … END_OF_DOCUMENT_TOKEN_TO_BE_REPLACED

After a slight respite, I’m back on The Road.  Welcome to Vietnam, a country of 91M people.  Current location: Ho Chi Minh City, population, approximately 8M, number of scooters and … END_OF_DOCUMENT_TOKEN_TO_BE_REPLACED

One of modern life’s great moments of anticipation: the luggage carousel, that familiar, “will they, or won’t they?” game your brain plays with you as you wait for your bags. You watch everyone else pluck their intended from the line and move on, to carry on with their lives. Sometimes, you’re one of them – one of the Lucky Ones.

And sometimes, you stand alone, beside nothing, pre-mourning your stuff. An Unlucky One.

Yesterday, I was an Unlucky One. I waited patiently, at a carousel that was unloading two flights. I watched everyone from my flight leave.

Head down in remorse, I went to the Baggage Claim Office.

My luggage, in it’s desire to see the world, had decided not to disembark the plane. It decided to carry on to the next destination.

Customer Service assured that me, if, someone at the next destination read the report she just issued, my bag would get back to me around 10pm. If not, definitely the next day.

“I’m travelling to Sydney tomorrow, if the bag doesn’t make it by then, what happens?”

“We can send it to Sydney, you would just have to pick it up at the airport.”

Okay. She handed me a WhatsApp number and told me they would text me if they heard anything.

Problem was, my bag was a bag without a name. The systems were down in Mulu, so, unable to print luggage tags, they just wrote on the destination (Miri) on a piece of paper, “MYY”. So, my bag was untrackable. It was basically single and ready to mingle.

I, on the other hand, was single and ready for a shower. My brain immediately went to thoughts of “how long will these smelly, dried-sweat filled clothes last – will they make it 24hrs?”, “Will they make it onto the next plane? And if they do, will the people next to me start to complain about holding their nose for eight hours?” Without my luggage I was a stinky-time bomb that no one would want on a plane.

Like most things, you don’t realize what you had, till it’s gone. But, like a good relationship, a break doesn’t necessarily mean a break-up.

Most hair salons in Malaysia are conveniently located in the air conditioned malls. Most of them are not busy, you just walk in.

For what is about to happen, not only would you pay through the nose in the US, but the line would also be a week long.

First, for about thirty minutes your hair gets a bubble bath where the bubbles get whipped into meringues, your head gets kneaded like it was the winning dough in The Great British Bake Off, and your scalp gets scratched as though you were a cat’s favorite post.

Then, your shoulders get a little massage.

And then, after you’ve been lulled into a state of relaxation where you couldn’t care if you were there for a haircut or a lobotomy – the procedure begins. 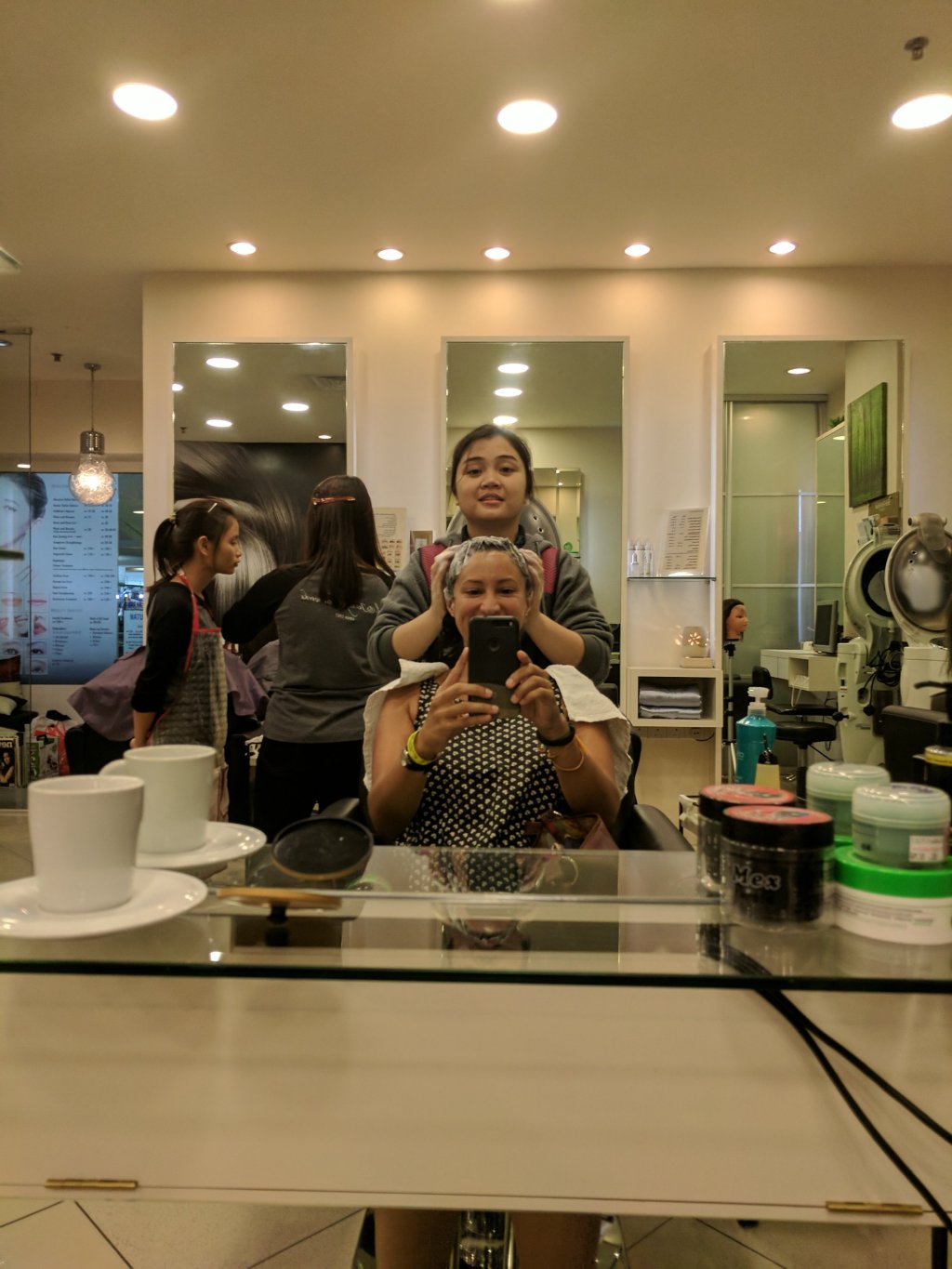 *joke courtesy of my father.  I’ve spent the last couple of days hiking through rainforest and climbing about some caves – with monks.  They had road tripped for two days, … END_OF_DOCUMENT_TOKEN_TO_BE_REPLACED

1. I (accidentally) laundered some (luckily) very sturdy money – but not so much that the authorities would notice.

2. While taking clothes out of the dryer, I left behind a sock and a pair of unattractive underwear. When I went back, two hours later – still in the dryer!

3. A very nice anonymous person paid for my (as of yet, not poisoned) dinner.

The question is – what happens next?

“Can I please have the “Back, Shoulders and Neck” massage?

Now, in the US, at a similar establishment, I would be led to a chair, one where you sit facing forwards, head down, back slabbed-out towards its intended opponent.

Then, a man stood on me, then sat on me, then curled me up as though your back is supposed to curl into a semiscircle – as though he were attempting to turn my previously semi-straight back into a croissant – and not a good one, one that you’d find at Dunkin Donuts.

Getting a Thai massage is like getting a lesson in being a contortionist, and instead of getting a “congrats, you are semi-flexible” sticker when you leave, you just get some filtered water to rehydrated your kneaded out, but entirely inflexible body.

Other moves included the “squish your shoulder blades down until your head is buried in a pillow and you can’t breath.” Thoughts at this point included: “Did I put on enough deoderant to not be super embarrassing when the coroner comes to inspect my body and deems it too unfit to have gone through such rigorous exercise?”

In the end, I don’t know if my back is stretched out, so much as it needs to stretch itself over to a chiropractor.

Thai Massages: for people that want to relax on the cheap, but can’t really afford a bottle of wine (here) and then end up getting the wine anyway, to try and loosen everything back up.

“Have you guys ever heard of a volunteer getting mango worms?” Was the sentence I used as I went around asking authoritative-type figures who might know the answer.  None of … END_OF_DOCUMENT_TOKEN_TO_BE_REPLACED

You know when you have one of those days with someone when you can imagine being married to them? But not one of those happy marriages, it may start out … END_OF_DOCUMENT_TOKEN_TO_BE_REPLACED

Bar Night (definition): once a week, dehydrated and exhausted, but usually freshly showered wildlife volunteers descend like an avalanche upon a bar in Hua Hin, Thailand (an hour away in a taxi ride that I am sure causes many a taxi driver to question their career decision). From 7:30-10:30p, they take in as many “2 for 1” cocktail specials as possible.

Prominent activities include: talking about how drunk they are, how much they are in-love with everyone here, taking Snapchat photos, dancing and, much to the staff’s chagrin – hanging like a monkey from the plastic exposed beams and/or curtain rods.

Being one who values a full stomach, I arrived after dinner. I walked in and beheld a scene that made me feel like Jane Goodall watching chimps. It was awkward, mostly unsuccessful debauchery – the likes that belonged not to Roman Toga Party, but to a Roman Thursday Night. I could only sip my two “two for one” mojitos, and sit in the back, my already greying hair turning more silver the more I thought about being the Jane Goodall of “younger people habits.”

Minutes later a 19 year old man saddled up to me and offered his sage advice:

“You should take it slow, I know a thing or two about drinking”

“Don’t worry, I will, I have been drinking for a while”

Apparently those Jane Goodall silvers had retreated enough to blend in with my subjects.

Beyond the Office
Blog at WordPress.com.